Delving Into the Theological Power of Money

Religion professor Devin Singh has found a topic with a lot of currency. 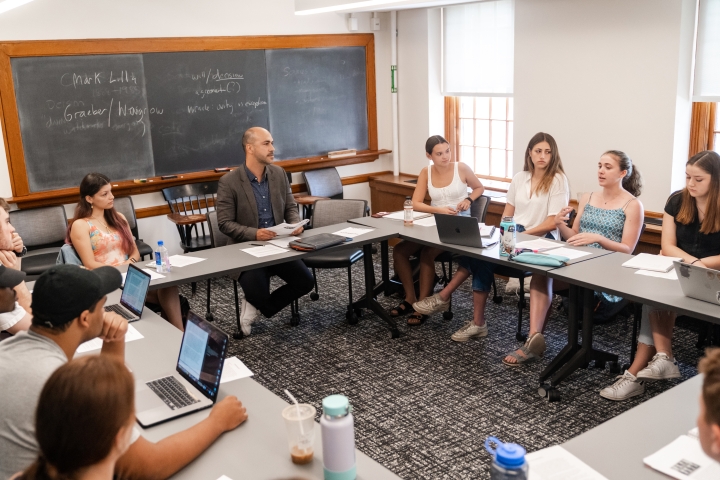 Money is on the mind these days. Inflationary gas prices, a rocky stock market, and fears of recession may have shaken some consumers’ faith in the economy.

That faith is of particular interest to Associate Professor of Religion Devin Singh, who studies the connections between economics and Christianity. Singh acknowledges that spiritual and money matters don’t traditionally go together. While most people understand that churches give money to charitable causes, what does religious doctrine have to do with debt and student loans?

Singh’s research explores how the language of economics and Christianity have historically intertwined.

“Part of my effort is to raise awareness of this genealogy, to shed light on where these things come from,” Singh says. “Both to give us a better understanding of them, but also then to say, if we want to change things” — to address inequality or exploitation, for example — “we need to know a bit about where they came from.”

Still, that connection isn’t always obvious. When Singh teaches his “God and Money” class, it can take time for his students to see the light.

If you’re a crypto-evangelist, you’re a firm believer, you have faith in crypto … and you want to persuade others to believe.

The act of salvation, of being redeemed, is an economic term, Singh explains, and God is described by some early Christian thinkers as managing the cosmos the way a money manager oversees finances. We have “faith” in our currencies. Though these are metaphors, Singh argues that they have implications about people’s attitudes toward money, work, and theology.

“And at the end of the course students are like, ‘Wow, professor, you’ve ruined me in the best way,’” Singh says. “‘I can’t not see these connections everywhere now, like religion and economics, religion and money.’” Singh adds some students have emailed him years later with a faith-and-economics connection they saw in the news, and a follow-up like that “means the world” to him.

His 2018 book, Divine Currency: The Theological Power of Money in the West, was well-received and explored how economic thinking influenced early Christian doctrine. More recently, Singh has been looking at cryptocurrencies, especially the quasi-religious language surrounding them.

“People call themselves crypto-evangelists, right?” Singh says. “They’re drawing on the language of evangelism, which is a religious term for spreading of faith. If you’re a crypto-evangelist, you’re a firm believer, you have faith in crypto … and you want to persuade others to believe.”

Singh thinks crypto and other digital currencies are here to stay, despite the recent market crashes that have sent shares tumbling. Looking to the past to consider the future, Singh notes that people have operated in cashless societies before, using an accounting system to keep track of exchanges. It’s not unlike crypto’s cloud-based ledger for currency holders.

“And this comes down to, again, fundamentally, money is about a kind of belief, a kind of faith,” Singh says. “This is why credit and credo and faith are all etymologically related.”

He’s also interested in artificial intelligence and the ways Silicon Valley denizens invoke religious ideas, such as uploading ourselves to the cloud as if we were preserving our souls, in their push for digitization.

“These technological changes are like a tsunami,” Singh says. “They’re pretty much inevitable. And so the issue is not whether we should make them, but how can we make them more humane and more equitable.” 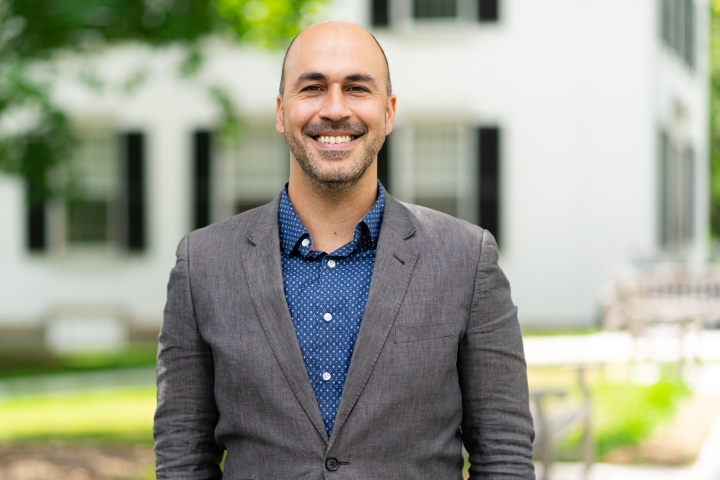 Although Singh was born in northern California, his mother’s work with the foreign service took them to Cameroon and Morocco, where Singh spent his elementary-school years. He grew up among Christian, Muslim, and indigenous African religions, and his father comes from a Sikh family. Back in the U.S., his mother had a born-again conversion experience.

“It’s all a bunch of stuff in the mix that I think shaped my interests,” Singh says.

Still, Singh started out as a biology major at Pomona College, with an eye on medical school until organic chemistry weeded him out. He came to religion classes having always been interested in the “big questions,” and Singh had good experiences with a professor in the department.

“I picked the major based on what was sort of happening in my life at the time, which was wrestling with these deep existential issues,” Singh says, adding: “I didn’t have a grand plan to become a religion professor.”

Singh earned a divinity degree, but his wide-ranging interests drew him toward academia. In graduate school, he layered sociology and anthropology courses onto his study of religion. Singh joined the Dartmouth faculty in 2015 after earning a PhD in religious studies from Yale and doing some postdoctoral work there.

“I think that I, in some ways, gravitated towards this profession because I tend toward the contemplative, introverted side,” Singh says. “I love to sit and think about ideas and read. And writing is my best form of communication, where I feel like my voice is most clear.”

Currently, Singh is finishing a book on debt, including the problems with excessive indebtedness and how debt has moral and religious aspects to it. He’s also planning a book on anger, examining it as a virtue and a positive energy for change.

While Singh enjoys the solitary research life, he also loves teaching, though as a self-professed “people-oriented introvert,” it can take him a while to decompress after a class.

“I love the interaction,” Singh says. “I can be very animated and talk plenty and have these very dynamic conversations. But it’s a draining experience.”

Department of Religion Chair Reiko Ohnuma calls Singh “impressive,” citing his wide-ranging scholarship, his national reputation as a public intellectual who makes his research accessible and meaningful for a wider audience, and his innovative course offerings.

“He is consistently one of the most popular professors in the department,” Ohnuma says.

Caris White ’23 calls Singh “a phenomenal teacher” and one of the most engaging lecturers on campus. She has recommended to her friends that they scroll through the course catalog to find Singh’s name, and just take whatever he is teaching.

Singh, who is White’s thesis adviser, has inspired her to consider a career in academia and religious studies. “He’s been both really approachable and really knowledgeable,” White says.

Despite the occasional energy drain after class, Singh enjoys teaching at a liberal arts institution like Dartmouth, where he gets to work with students from a range of majors, backgrounds, and interests.

“If I were teaching at a graduate school in a religion department, I would just be influencing a handful of future scholars, which is also great and super-important for the profession,” he says. “But it’s great to be influencing people who are going to be leaders of corporations, leaders in medicine and government policy.”